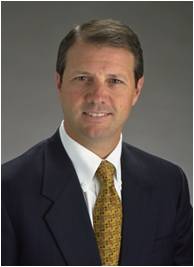 Executive Vice Chancellor of the University of Kansas Medical Center since 2013, Douglas A. Girod, M.D., oversees the educational, research, patient care and community engagement missions of the University of Kansas Schools of Medicine, Nursing and Health Professions, with more than 3,300 students, 3,800 faculty and staff, $116 million in externally funded research, and campuses in Kansas City, Wichita, and Salina. Girod was interim executive dean of the KU School of Medicine until 2014 and as Senior Associate Dean for Clinical Affairs and the Russell E. Bridwell Endowed Chair of the Department of Otolaryngology-Head and Neck Surgery. Girod earned his bachelor’s degree in chemistry from the University of California at Davis, and his medical degree from the University of California at San Francisco. He completed his residency and an NIH research fellowship at the University of Washington in Seattle. Girod also served as Vice Chairman and Research Director in Otolaryngology at the Naval Medical Center in Oakland, Calif. In the U.S. Navy Reserve, he rose to the rank of Lieutenant Commander and earned the Meritorious Service Medal. He is a practicing head and neck surgeon and has held leadership positions within the American Head and Neck Society, where he is currently president-elect.