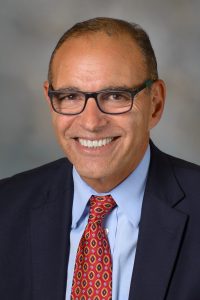 Ehab Hanna, M.D., FACS, is an internationally recognized head and neck surgeon and expert in the treatment of patients with skull base tumors and head and neck cancer. A native of Egypt, Dr. Hanna earned his medical degree, and completed a residency in Otolaryngology-Head and Neck Surgery in Cairo, Egypt. In 1988, he immigrated to the United States where he completed a surgery internship at Vanderbilt University Medical Center, and residency in Otolaryngology-Head and Neck Surgery at The Cleveland Clinic Foundation. He then pursued advanced fellowship training in skull base surgery and head and neck surgical oncology at the University of Pittsburgh Medical Center. In 1994 he was appointed as faculty in the department of Otolaryngology Head and Neck Surgery at the University of Arkansas for Medical Sciences where he quickly rose to the rank of full Professor. He was then recruited to MD Anderson in 2004 to lead their Skull Base Tumor program and the Multidisciplinary Head and Neck Center.

Dr. Hanna is currently a Professor and Vice Chair of the Department of Head and Neck Surgery with a joint appointment in the Department of Neurosurgery, MD Anderson Cancer Center. He also serves as an Adjunct Professor of Otolaryngology and Head and Neck Surgery at Baylor College of Medicine. He is the medical director of the Multidisciplinary Head and Neck Center and director of the Skull Base Tumor program. For the last 15 years, Dr. Hanna has consistently been named one of America’s Best Doctors and Top Doctors in Cancer.
In addition to patient care, Dr. Hanna is actively engaged in clinical and translational research with emphasis on skull base tumors. He authored over 350 publications including peer-reviewed manuscripts (170), invited articles, book chapters, and editorials. He co-edited three major textbooks on Cancer of the Head and Neck, Cancer of the Larynx, and Comprehensive Management of Skull Base Tumors.

He is the Editor-in-Chief of the journal of Head & Neck, which is the official journal of the International Federation of Head and Neck Societies and the International Academy of Oral Oncology. Dr. Hanna served as the President of the North American Skull Base Society (2013-2014) and the President of the American Head and Neck Society (2018-2019).