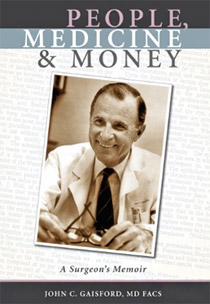 John C. (Jack) Gaisford, M.D., attended Georgetown Medical School. He subsequently served during WWII in the US Army, having helped establish a M*A*S*H unit in the Philippines. Dr. Gaisford returned to Pittsburgh where he completed his residency in general and plastic surgery, subsequent to which, he entered practice as a head and neck surgeon in the city of Pittsburgh. Dr. Gaisford helped establish the first burn treatment center in Pittsburgh, PA.

Dr. Gaisford has contributed far-reaching textbooks such as “The 92nd Field Hospital: A Surgeon’s Memories of WWII” and “Matt Ridgway”, a biography of one of the greatest military men in history who commanded the 82nd Airborne he led through Sicily and Normandy campaigns. General Ridgway was a neighbor and personal friend of Dr. Gaisford. Dr. Gaisford has also written “A Taste of Medicine.” Born in 1915, Dr. Gaisford is currently working on a single author book, “Alpha and Omega of a Physician.”