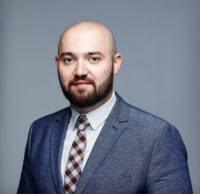 Areas of Interest in Head and Neck Surgery

Dr.Steve Yusupov is a Dentist as well as a Physician, practicing the full scope of Oral & Maxillofacial Surgery. He has unique training to manage Head and Neck oncologic disease. Dr. Steve Yusupov attended City University of New York, Queens College, and graduated with a B.A. with Honors in 2007.  He then went on to NYU College of Dentistry where he received his D.D.S. with High Honors in 2011, graduating in the top ten percent of his class.

After obtaining his M.D. in 2014 from SUNY Downstate College of Medicine, Dr. Yusupov completed a one-year General Surgery training at SUNY Downstate, which included exposure to a wide variety of cases from trauma and critical care management to cosmetic plastic surgery procedures.

After completion of general surgical training, Dr. Steve Yusupov went on to subspecialty training in Oral and Maxillofacial surgery. He was appointed Chief Resident at Kings County Hospital Center starting in July 2016 through June 2017. During his year serving as administrative chief resident, he was awarded resident of the year by his colleagues. At King’s County, his training included extensive facial trauma reconstruction, surgical management of dentofacial deformity, dentoalveolar surgery, and benign maxillofacial pathology.

After finishing residency training, Dr.Yusupov went on to train with some of the leaders in the field of Head and Neck oncologic surgery, Facial Plastic and Reconstructive surgery, and Base of Skull surgery at the prestigious NY Head and Neck Institute. In his fellowship, Dr.Yusupov had the privilege of working closely with the past president of American Head and Neck as well as American Skull Base societies. Additionally trained with one of the founding fathers of modern orthognathic surgery and other leaders in surgical subspecialties of head, face, and neck.

Currently Dr. Yusupov practices extended scope Oral & Maxillofacial Surgery with emphasis on Head & Neck Surgery in a hospital based private practice in Staten Island, NY. He is newly appointed director of Maxillofacial Oncology within the department of Otolaryngology at Staten Island University Hospital.