It is with great sadness that I write to you about the passing of one of the true giants of the field of Head and Neck Surgical Oncology, Dr. Robert Byers passed away Saturday, March 6, 2021 at 3 AM.  There will be no funeral, but there will be a Memorial Service which will be announced later this month. 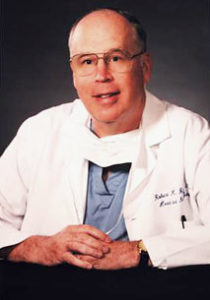 Robert Maxwell Byers, M.D. was born in Union Hospital, Baltimore Maryland on September 24, 1937. He grew up on the Eastern Shore of Maryland in the small town of Elkton. Very active in the varsity sports of baseball, basketball and track during his high school years, he continued his athletic participation at Duke University along with his pre-med studies. He entered the University of Maryland Medical School in Baltimore in 1959 where he excelled in his medical studies and received membership in AOA and the Rush Honor Medical Society. The highlight of his sophomore year was his 1961 marriage to Marcia Davis, a high school sweetheart. During his junior year, he was commissioned an Ensign in the United States Naval Reserve and later rose to the rank of Captain in 1986.

In 1963, Dr. Byers begin his general surgical residency with Dr. Robert Buxton at the University Hospital in Baltimore. Five years later, as a fully trained general surgeon, he went to the Republic of Vietnam with the 1st Marine Division where he received a unit commendation medal and a combat action ribbon. On return to the United States, he spent a year at Quonset Point, Rhode Island Naval Hospital as Chief of Surgery. In 1969, the American Board of Surgery certified him. After discharge from the Navy in 1970, he and his family moved to Houston, Texas where he began a fellowship in Surgical Oncology at the University of Texas M.D. Anderson Cancer Center under the guidance of Drs. R. Lee Clark, Richard Martin, Ed White, William MacComb, Richard Jesse and Alando J. Ballantyne. This move proved to be a decisive event, as he never left. His career in Head and Neck Surgical Oncology was born nurtured and matured during the 31 years of his academic/clinical practice at the University of Texas M.D. Anderson Cancer Center. In 1974, his fourth son, MacGregor was born.

During his tenure at M.D. Anderson Cancer Center he rose through the ranks from Assistant Professor in 1972 to Associate Professor in 1976 and, finally, Professor and Surgeon in 1981. In 1998, he was honored with the Distinguished Alando J. Ballantyne Chair of Head and Neck Surgery. He was the author or co-author of over 200 published papers, book chapters and monographs. He gave invited lectures all over the world. In 1999, he was selected to give the Hayes Martin Memorial Lecture at the 5th International Conference on Head and Neck Cancer (A copy of this lecture can viewed by clicking here). He was President of the American Radium Society and President of the Society of Head and Neck Surgeons both in 1995 – 1996. His research interests and his expertise were focused on cancer of the oral cavity, head and neck cancer in young people and treatment of the neck involved with metastatic cancer with a particular interest in various neck dissections. Dr. Byers was a member of many prestigious societies of which the Southern Surgical Association, the Texas Surgical Society, the American College of Surgeons and the Society of Surgical Oncologists are but a few. He was a peer reviewer for many medical journals and on the Editorial Board of three. During his 31 years at the University of Texas M.D. Anderson Cancer Center he participated in the surgical education of over 300 residents and fellows, many of who have gone on to become prominent members of the specialty.

As a former trainee, I can honestly say that he greatly shaped my thinking about oncologic problems and attention to technical precision and hemostasis in the operating room.  Almost every time I operate, I hear his voice saying, “cut on the patient side”.  He was always on the patient’s side!  I know that he has impacted many other past trainees and colleagues in the same positive way, and we will all miss him.

Dr. Jeffrey N. Myers received his medical (MD) and doctoral (PhD) degrees from the University of Pennsylvania School of Medicine and he then completed his residency training in Otolaryngology-Head and Neck Surgery at the University of Pittsburgh. He subsequently completed fellowship training in Head and Neck Surgical Oncology at the University of Texas MD Anderson Cancer Center, where he has been on the faculty ever since. Dr. Myers leads a basic and translational research program and his primary research interests are in the role of p53 mutation in oral cancer progression, metastasis and response to treatment.