What is a Neck Dissection and Why is it Performed?

Neck dissection is usually performed to remove cancer that has spread to lymph nodes in the neck. 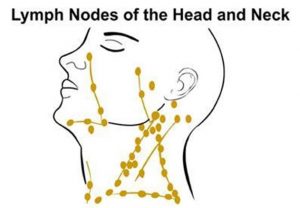 Lymph nodes are small bean shaped glands scattered throughout the body that filter and process lymph fluid from other organs. The immune cells in the lymph nodes help the body fight infection. When cancer cells spread from another part of the body, they may get caught in a lymph node where they grow. An individual might feel a non-tender lump in the neck. The cancer in the lymph node is known as a metastasis. When someone undergoes surgery for cancer that has spread to lymph nodes, both the initial or primary cancer as well as the metastases must be removed.

Neck dissection refers to the removal of lymph nodes and surrounding tissue from the neck for the purpose of cancer treatment. The extent of tissue removal depends on many factors including, the stage of disease which reflects the extent of cancer as well as the type of cancer. The most common cancers removed from lymph nodes in the neck include head and neck squamous cell carcinomas, skin cancers including melanoma and thyroid cancers.. In general, the goal of neck dissection is to remove all the lymph nodes within a predefined anatomic area. Many of the lymph nodes removed during surgery will not prove to have cancer in them. 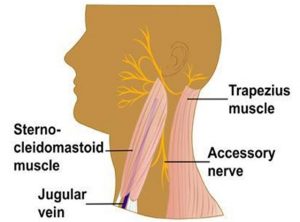 Many patients wonder why so many non-cancerous lymph nodes must be removed; why can’t surgery be done to remove only the lymph nodes with cancer in them?

A cancer may shed any number of metastases that lodge in lymph nodes, grow and spread. There are over 150 lymph nodes on each side of the neck. During an operation, a surgeon will not be able to tell if a lymph node is clean, or if it has cancer that will later grow into a visible neck lump. The lymph nodes must be processed and tested; this takes time. For that reason, it is recommended that the lymph nodes in a predefined region are removed, not just lymph nodes that are obviously enlarged with cancer.

In addition, different cancers spread differently. Skin cancers first spread to lymph nodes in different parts of the neck than thyroid cancers or oral or larynx cancers. Squamous cell carcinomas that start in the lining or mucosa of the mouth, throat or larynx have a tendency to spread to lymph nodes early; cancer cells can often be detected in lymph nodes in the neck when examined under the microscope, even in the absence of visible or palpable neck lumps.

Lymph node metastasis reduces the survival of patients with squamous cell carcinoma by half. The survival rate is less than 5% in patients who previously underwent surgery and have a recurrent metastasis in the neck. Therefore, the control of cancer that has spread to the neck is one of the most important aspects in the successful management of these particular cancers. The neck dissection is a standardized procedure that was developed to ensure the complete removal of cancer that has spread to the lymph nodes of the neck.

Historically, radical neck dissections were the most commonly performed type of neck dissection performed by surgeons. This is no longer the case. Most patients are candidates for a less radical operation.

Neck dissections are done under general anesthesia through an incision that runs along a skin crease in the neck, extending vertically on the side of the neck. Incisions are usually designed to enhance the visualization and protection of important structures in the neck, and enable the safe removal of lymph nodes that harbor cancer.

Beneath the skin, underlying fat, and a thin layer of muscle (the platysma), the dissection proceeds to identify and remove the tissue containing the lymph nodes. If the sternocleidomastoid muscle is removed as part of the operation, there may be some flattening of the neck, but removal of this muscle rarely results in significant weakness.

What are the risks of neck dissection?

Several important nerves are found in the neck around the lymph nodes, and depending on the area of the neck to be operated, these nerves can be at risk for damage.   The primary nerves of concern are-

Some problems are attributable to nerve injury; more commonly, scarring under the skin from surgery and radiation contributes to disability. Some problems may be avoided with early and faithful adherence to a shoulder range of motion exercise program, lymphedema or speech therapy rehabilitation programs.

Congratulations to the 2019 AHNS Award Winners

Congratulations to the 2018 AHNS Award Winners