Problem:
Cutaneous squamous cell carcinoma (cSCC) is a common malignancy, accounting for 20% of all skin malignancies1; furthermore, 80-90% of cSCC are located on thehead or neck2.  With surgical excision most localized cSCC has an excellent prognosis, with 5 year cure rates >90%3.  However, cSCC does have metastatic potential; in the 4% of cases that metastasize4 to regional lymphatics, the 5-year survival rate drops to 50-60%5.  Thus, risk-stratification and identification of patients with potential metastatic spread is important to optimize treatment.  While the majority of cSCC are easily treated with surgical excision and do not require nodal evaluation, the risk of metastatic spread may be as high as 47% in some high-risk populations (Table 1)6.  Sentinel lymph node biopsy (SLNB) is a method of evaluating the draining nodal basin of a primary cancer for occult disease that is widely used in melanoma, breast cancer, and other malignancies.  SLNB increases staging and prognosis accuracy and aids in local disease control6, although recent trials have not demonstrated overall survival benefit with SLNB7.  This technique has intermittently been applied to cSCC for many years, but the optimal use of SLNB in cSCC has not yet been defined. 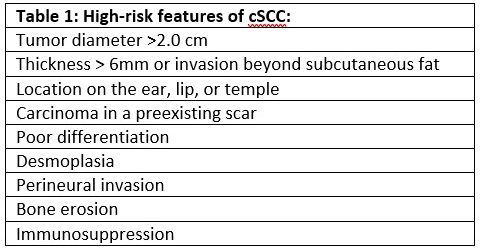 Evidence
There are currently no large-scale, prospective, randomized clinical trials examining the use of SLNB in cSCC.  There are many prospective observational, retrospective, and meta-analysis studies examining this question, which are generally small (<200 patients) and limited to single-institution studies.  These studies demonstrate significant heterogeneity in patient inclusion criteria, methodology, and outcome measurements.  SLN positivity rates range from 0-66% across studies8, while meta-analyses of multiple studies have found positivity rates of 8%, 12%, and 14%.9,10,11  One literature review reported the sensitivity of SLNB to be 79%, specificity of 100%, and negative predictive value of 96%.12  A significant source of heterogeneity in these studies is the number and type of high risk features of the patients within each study.  While there is generally consensus regarding what constitutes high-risk features of cSCC (Table 1), it is not clear which of these features may provide the strongest indication for SLNB.

There is some data to support SLNB as a prognostic test in cSCC.  One study13 of 62 patients found a 100% 3-year survival in patient with negative SLNB, and a 20.8% 3 year survival in those with a positive SLNB.  Similarly, a second prospective study14 of 57 patients found a significant difference in disease-specific survival between SLNB positive and negative patients. In addition, other studies have shown that locoregional and distant recurrence is more likely in patient with positive SLNB.  In all studies, patients with positive SLNB were treated with additional surgery, radiation, or both.  Only one retrospective study compared SLNB patients to an observation arm; in this study of 720 patients, there were slightly more cSCC-related deaths in the SLNB arm (7.14% vs 4.74% in the observation arm) although this was not statistically significant.15  Thus, it remains unclear if SLNB and directed adjuvant therapy may improve survival in patients with cSCC.

Current guidelines on SLNB
Management of high-risk cSCC can be complex, and multiple guidelines exist to guide treatment decisions in these patients.  Most guidelines currently available discuss SLNB and conclude the data surrounding SLNB is limited, and few definitive statements are available.  Canadian guidelines16 provide a weak recommendation to consider SLNB as an optional procedure in certain high-risk patients; alternatively, European guidelines17 state that SLNB cannot be recommended outside of a clinical trial.  SLNB is not incorporated into any National Comprehensive Cancer Network treatment algorithms for cSCC; it contains a statement that “it is unclear whether SLNB followed by completion lymph node dissection or adjuvant RT will improve patient outcomes.  The criteria for selecting patients for SLNB are also unclear.”18

Bottom line:
SLNB likely provides some prognostic information in cSCC, but to date it is unclear which patients may benefit from this procedure, or its effect on the overall disease course.  Large-scale, well-controlled clinical trials are needed to define when SLNB is most useful in the management of cSCC.  While no clear recommendations currently exist, it does appear reasonable to consider SLNB in certain high-risk cases of cSCC; for example, patients with two or more high-risk features or after collaborative decision-making in a multidisciplinary treatment setting.

Daniel Clayburgh is an associate professor of Otolaryngology-Head and Neck Surgery at Oregon Health Sciences University and the Chief of Surgery at the Portland Veterans Affairs Medical Center. He completed medical and graduate school at the University of Chicago, otolaryngology residency at Oregon Health Sciences University, and head and neck fellowship at the University of Pittsburgh. His research interests primarily focus on perioperative optimization of head and surgical outcomes and developing novel prognostic factors in head and neck cancer patients.